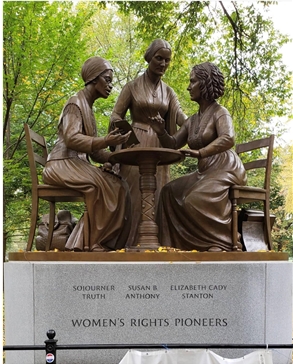 Known collectively as Liberators and Prophets, Suffragettes Elizabeth Cady Stanton, Amelia Bloomer, Sojourner Truth and Harriet Ross Tubman openly challenged teachings by the Church, as well as societal norms that were used during the 1800s and early 1900s to oppress and subordinate women and enslaved African-Americans. Through the power of Scripture, these prophets created and transformed the women’s rights and abolitionist movements nationwide, despite being relegated to subservient status by the Church due to their gender and race.Join us on Sunday to learn more about the transformative impact of these “Great Cloud of Witnesses,” from the Seneca Falls convention in 1848 to present day.