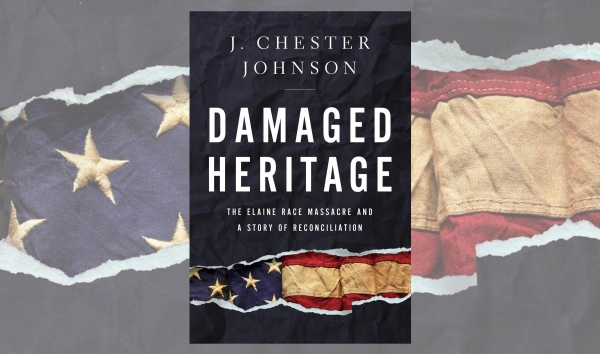 On Sunday, June 28, at 8:30 a.m, St. John's Cathedral hosted a conversation on Zoom that was focused on the new book, Damaged Heritage: The Elaine Race Massacre and A Story of Reconciliation by J. Chester Johnson. The program consisted of a presentation by the author, a discussion on the book by the author and Dr. Catherine Meeks, Executive Director of the Absalom Jones Episcopal Center for Racial Healing, and a general question and answer session that involved participation by the attendees for this Zoom program. This is the recording of that conversation.

Damaged Heritage: The Elaine Race Massacre and A Story of Reconciliation is available in the Cathedral Bookstore. Order your copy here.

More about Damaged Heritage
An illuminating journey to racial reconciliation experienced by two Americans – one black and one white, Damaged Heritage begins with an account of the 1919 Elaine Race Massacre, which, though arguably the worst on record for the nation against African-Americans, has been effectively unknown for a century, thanks to the whitewashing of history.


In 2008, Johnson was asked to write the Litany of Offense and Apology for a National Day of Repentance when the Episcopal Church formally apologized for its role in transatlantic slavery and related evils. In his research, he happened upon a treatise by historian and anti-lynching advocate, Ida B. Wells, on the Elaine Massacre, where more than a hundred and possibly hundreds of African-American men, women, and children perished at the hands of white posses, vigilantes, and federal troops in the rich cotton fields on the Arkansas side of the Mississippi River Delta. Johnson, who grew up one county removed from Phillips County, Arkansas, site of the white onslaughts, also determined that his beloved grandfather, who had been Johnson’s principal caretaker in the early years of his life, participated in the Massacre. The discovery shook Johnson to his core.

In 2014, the author met Sheila L. Walker, who wrote the Foreword to Damaged Heritage and who was a descendant of several Elaine Massacre victims; over the succeeding six years, the two, who were joined by the horrific conflagration, have pursued a goal of racial reconciliation that stands in stark contrast to the murderous event that brought their forebears together. The book, which describes how excessive reverence of the past and traditions by whites in America permits damaged heritage to be transferred into continuous racism from generation to generation, also offers a blueprint for how our pluralistic society can at last acknowledge – and repudiate – damaged heritage and begin a path toward true healing.

About Dr. Catherine Meeks
Catherine Meeks, PhD, is Executive Director of the Absalom Jones Center for Racial Healing. Prior to the center's opening she chaired its precursor, Beloved Community: Commission for Dismantling Racism for the Episcopal Diocese of Atlanta. A sought-after teacher and workshop leader, Catherine brings four decades of experience to the work of transforming the dismantling racism work in Atlanta. The core of her work has been with people who have been marginalized because of economic status, race, gender or physical ability as they pursue liberation, justice and access to resources that can help lead them to health, wellness and a more abundant life. This work grows out of her understanding of her call to the vocation of teacher as well as her realization that all of humanity is one family which God desires to unite.


Learn more about the book, Johnson, and his relationship with Sheila Walker, a descendant of victims of the massacre through this video from Trinity Church Wall Street, where Johnson is a member.