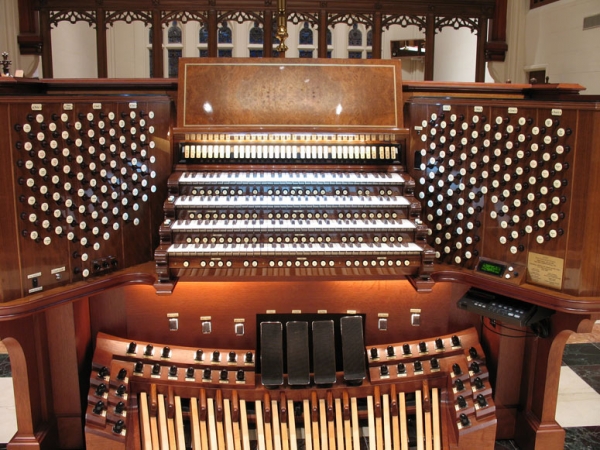 Historically, cathedrals are known for three important traditions. These have been called the “Chief Glories” over many centuries.

The term “Great Organ” describes cathedral organs and has been used for centuries in most of the English Cathedrals as well as in Cathedrals in the Americas.

The first organ in St. John’s was built by The Roosevelt Firm of New York in the 1880’s.It was lost in the “Great Fire” in Jacksonville. The next instrument was built by Hook and Hastings of Boston, followed by a large Moller organ in 1949. Fifteen ranks of pipes were incorporated in the 1983 Austin organ. This stewardship was also included in the 2006 renovation and enlargement by Roger Colby Organ Company and Walker Technical Company. The organ presently includes 76 ranks of pipes and 46 digital ranks in the grand 4-manual (keyboard) console.

Much work was done in the main organ located on both sides of the chancel in 2006 and a wonderful new organ situated on the Cathedral’s West Wall. Who hasn’t been impressed with The En Chamade Trumpet horizontally protruding from the West Organ!

The organ is ideal for the French School of organ performance as well as colorful support of the choir and the playing of J. S. Bach’s Music. Leading the congregation in the singing of hymns and service music is perhaps the most important responsibility of the “Great Organ”.

The organ was dedicated in February of 1984 with a program played by Christopher Dearnley of St. Paul’s Cathedral, London. Mr. Dearnley also played for the royal wedding of Charles and Diana in 1981.St. John’s was packed with close to 1,000 people overflowing into the vestibules and sacristy, people sitting on every available space of the floor and over 400 folks having to be turned away!

Since that time, we have hosted concerts with some of the leading organists in the world, two concerts with the Jacksonville Symphony as well as programs by local musicians.

The organ is presided over by Timothy Tuller, Canon for Music, who does a masterful job in presenting wonderful music on this noted organ.

A fund has been established, known as the Stanly and Claudia Gordon Music Endowment Fund, to benefit innovative programs produced by the music ministry and to provide for the time when major repairs will be required in the years ahead upon the Cathedral’s organ. Friends and members of St. John’s are encouraged to make contributions to this fund!

The care of the organ is entrusted to James Freeman and Associates, organ builders.

Learn more about the Great Organ

Donate altar flowers in memory of someone or to commemorate a special day such as a birthday or anniversary. The suggested donation is $100.00 Please include the date that you would like the flowers on the altar and any words for the dedication in the memo field online. Donate online.