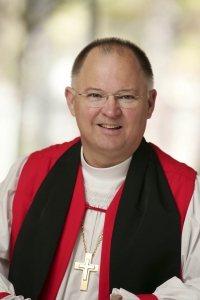 The Right Reverend Samuel Johnson Howard, a native of North Carolina, was elected bishop coadjutor of the Episcopal Diocese of Florida on May 16, 2003 and was consecrated at St. John’s Cathedral, Jacksonville, November 1, 2003. He was instituted as 8th bishop of the Diocese of Florida on January 29th, 2004. The Cathedral is the seat of the Bishop, though he travels nearly each week to other churches in the diocese. Bishop Howard served as vicar of Trinity Church Wall Street, New York, since December of 1997. 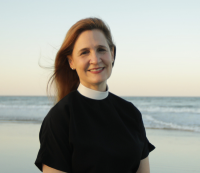 Kate is the author of seven books. The most recent are Angels of the Bible: Finding Grace, Beauty and Meaning and Healed: How Mary Magdalene Was Made Well. Her books can be purchased at the St. John’s Cathedral Bookstore or on Amazon.com. 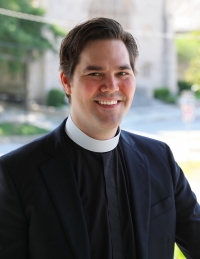 Mark studied English and Economics at Georgetown and the University of Florida, earned a Master of Divinity from Yale Divinity School, and received a Certificate in Nonprofit Management from Harvard University.

Mark is married to Dr. Mary Anderson, a Dermatologist in private practice in Jacksonville. They are thrilled to be raising their son, Philip, in the same church where they were married 10 years ago. 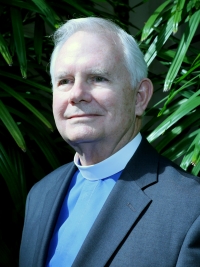 Gee has served in parishes and dioceses in New York, Long Island and Florida as Rector, Vicar, Interim and Administrative Dean. After practicing law in Jacksonville, Gee moved from his hometown to New York to attend and graduate fromThe General Theological Seminary. Gee has come to us to maintain and enhance the overall care of parishioners and their families in times of need and celebration. 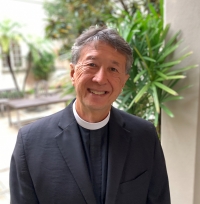 Since his ordination as a priest at St. John’s Cathedral in 1985, Father Kahl’s entire ministry has taken place in the state of Florida and it has always been in the context of a church and school partnership. He has served as the long-time rector and school chaplain of parishes in Coral Gables and Tampa, an assistant rector and chaplain of parishes in Jacksonville Beach and Jacksonville.

His belief that parish and diocese are partners in a common mission has been expressed in his service as a member of the executive board of two dioceses.

Upon his retirement as an active priest, Father Kahl has returned to his home Diocese of Florida.

He is the Director of the Cathedral’s Center for Spirituality and Prayer.

Father Kahl serves as the Diocesan Chaplain to the Retired Clergy Community.

Father Kahl describes himself as a contemplative person and priest, believing strongly that the spiritual life is grounded in silence, solitude, and stillness. His faith is guided by the Anglican precepts that Christianity is Biblical, Creedal, Sacramental and Episcopal.

Father Kahl was born in Sendai, Japan, and grew up as an Army brat, the oldest of four children. He lived in thirteen different places in the first fourteen years of his life before the family settled in Tallahassee, where his sisters still live. His brother lives in Minnesota. He is a graduate of Leon High School, Florida State University, and the Church Divinity School of the Pacific.

Father Kahl writes about himself: “I am the father of three adult children, Abigail, Madeleine, and Aidan. I am in the constant company of my partner, Margaret.

“I love to take long walks, anywhere, anytime but especially on the Florida beaches. I love to fish in cool waters, build large sandcastles, and have meaningful conversations long into the night. Reading is a favorite activity and I have been known to keep two or three books open at the same time. I am passionate about baseball at all levels but admit to a life-long loyalty to the New York Yankees.

“But most of all I love the Lord Jesus Christ. It is my heart’s deepest desire do all things necessary to help others come to a lasting and abiding relationship with Him who Is The Way, The Truth and The Life.

“I love serving the Lord Jesus as a priest of the Episcopal Church. I am blessed when I am able to disciple and enable persons with the goal that they may come to ‘know, love and serve the Lord’.

“I am guided in all things by a biblical principle written in St. Paul’s First Letter to Timothy: ‘The aim of such instruction is love that comes from a pure heart, a good conscience, and sincere faith.’ "

A native of Montgomery, Alabama, Saundra grew up in the Baptist Church, later coming to Jacksonville and to the Episcopal Church through the influence of her husband, Bob Kidd. The Kidds have been long-time active members of St. Mark’s Church, Ortega, and it was by their sponsorship that Saundra sought ordained diaconal ministry. After her ordination four years ago, she served at St. Mark’s until June 1, 2020.

In addition to her degrees from Huntington College, Montgomery, and the University of Alabama, Saundra has also completed significant theological education in preparation for ordination. Following her masters program in Math, Saundra worked for Prudential/AETNA for 27 years, retiring as the Director of Small Business Operations.

Saundra has a wide breadth of experience in both lay and ordained ministry, serving primarily in outreach, formation and pastoral care. She also has participated at the Diocesan level, currently serving on the Commission on Ministry. Saundra’s areas of focus at St. John’s will continue to be the same.

She and Bob have two adult children, Tiffany and Andy, and two grandchildren, Maggie and Emily. 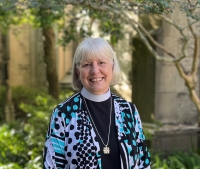 Deacon Linda Rosengren retired as a hospital chaplain with Baptist Health in March 2021. Her work in the hospital included the Newborn Intensive Care Unit, Women's Services and Bereavement Support for families. Following ordination in 1997, she served in churches in Orlando and Jacksonville. In 2006, she left her full-time work in the church to follow her passion for hospital chaplaincy. Linda will be working with the Christian Formation Leaders and assisting the Liturgical Team.

Deacon Linda is a native of South Carolina and received her Master of Education from the College of Charleston. She is married to Gar Rosengren. They have two married sons and four grandchildren who live "too far away."

Donate altar flowers in memory of someone or to commemorate a special day such as a birthday or anniversary. The suggested donation is $65.00 and should be sent to: St John's Cathedral, Attention: Accounting/Flower Donation, 256 East Church Street, Jacksonville, FL 32202. Please include the date that you would like the flowers on the altar and any words for the dedication when you send in your donation. Or donate onlinenow.