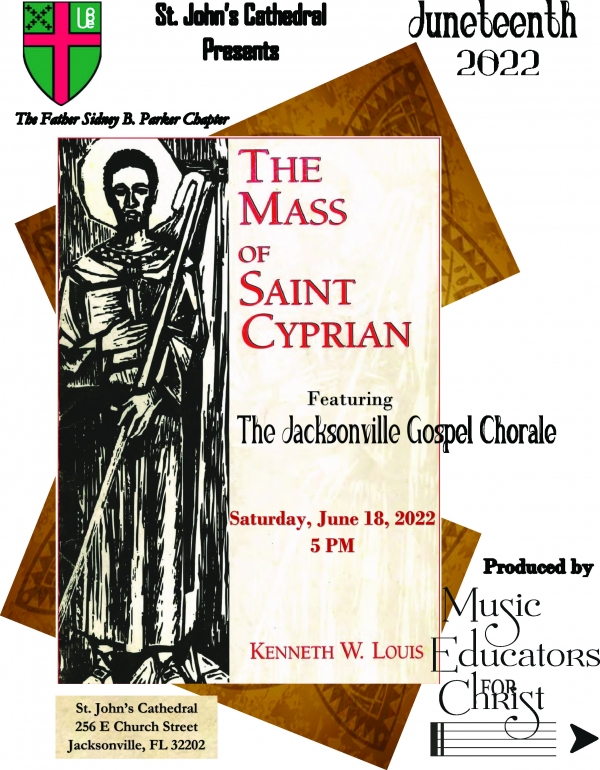 The Jacksonville Gospel Chorale is a collaboration of Christian singers from the Jacksonville area. Their founder/director is Cedric Williams. The Chorale is dedicated to sharing and preserving the Art form of “African American Sacred Choral Music."

The Mass of St. Cyprian was written and composed by Kenneth W. Louis. It first appeared in 1969. The entire composition has eight titles or tracks. Each section averages about two minutes in length. Louis named his composition in honor of St. Cyprian. Since this is an African-American setting, it is appropriate for Kenneth Louis to name it after one of Africa’s most famous liturgists.

St. Cyprian lived from 210 to 258 A.D. For the last ten years of his life he was Bishop of Carthage in northern Africa. He and an earlier Carthaginian theologian, Tertullian, fostered what became known as the African Rite. While it was in Latin and closely connected to liturgies from Rome, it was known to have a special African flavor or expression. This Rite was not only native to Carthage and the northern coastline of Africa, but it also extended south to Numidia and Ethiopia.

Prior to the Council of Nicaea in 325 A.D., the African Rite in prayers, Holy Eucharist, Holy Baptism, Holy Matrimony, and the Burial Office was known for brevity, simplicity, and an encouragement of impromptu or spontaneous expression. After Nicaea the African Rite became more developed and elegant. The reason behind the change is that before 325 A.D. the African Church received a lion’s share of persecution from the then pagan dominated Roman Empire. With the reign of Constantine and the acceptance by the Empire of Christianity, the African Church could finally flourish free of attack and oppression.

In the seventh and eighth centuries A.D. The Archdiocese of Carthage lost nearly all of its influence. Islam spread across all of northern Africa and became the area’s official religion. The African Rite’s texts began to disappear or be destroyed. In many respects the African Rite became part of the Roman Rite, but Western Europe regarded the African liturgical expression as fundamental to Roman worship and to have strong influence upon the Mozarabic and Gallican Rites.

As we enjoy Kenneth W. Louis’ Mass of St. Cyprian, let us give thanks for St. Cyprian of Carthage and for the rich liturgical tradition of the African Church that he helped foster.

Donate altar flowers in memory of someone or to commemorate a special day such as a birthday or anniversary. The suggested donation is $65.00 and should be sent to: St John's Cathedral, Attention: Accounting/Flower Donation, 256 East Church Street, Jacksonville, FL 32202. Please include the date that you would like the flowers on the altar and any words for the dedication when you send in your donation. Or donate onlinenow.